At just £250 SIM-free, the Honor 6 is not only half the price of other top handsets such as the Samsung Galaxy S5 , HTC One (m8) and Motorola's new Moto X , but it also claims to be the world's fastest 4G smartphone. According to Honor, a new company that's spun out of Huawei , that's thanks to its support for LTE Cat 6, which theoretically supports download speeds up to 300Mbps, and its Kirin 920 chipset, which has been developed in-house at Honor.

However, it’s worth noting that no network supports LTE Cat 6 at the time of writing. Even EE's newly launched 4G+ network only supports a maximum of 150Mbit/s, and that's available in precious few places. While our tests suggest the phone's octa-core processor doesn't provides the unparalleled performance that Honor is claiming, though it's certainly no slow coach.

The processor is made up of a quad-core Cortex-A15 chip running at up 2.0GHz and a quad-core Cortex-A7 that generally runs at 1.3GHz. This follows ARM's long heralded, but little utilised, big.LITTLE concept. The two cores run side-by-side, and the phone can intelligently decide which one to use to preserve battery power or provide maximum performance. To date it has only been widely used in Samsung Exynos chipsets for the Galaxy S4 and S5 among others. However, in the UK we got the Snapdragon-based variant of those phones, rather than the eight-core chips.

The chipset is paired with 3GB of RAM, making for an impressive spec on paper. Our SunSpider benchmark score of 617ms in the phone's default browser, was over 200ms slower than the Samsung Galaxy S5 though, which completed the test in 391ms. The Honor 6’s score is still remarkable for such a cheap phone, and we managed to improve it to 578ms in Chrome once we'd enabled the phone's Performance mode. The Honor 6 also beats its nearest competitors, the Nexus 5 and Sony's award-winning £335 Xperia Z3 Compact, by a similar margin. Web browsing was beautifully smooth and responsive, too, and it handled The Guardian's desktop home page admirably.

Battery life was good, but we were expecting more from the Honor 6’s clever chipset design and large 3,100mAh battery. The Samsung Galaxy Note 4 has a 3,220mAh battery, for example, and it lasted a massive 18 hours and 55 minutes in our continuous video playback test, but the Honor 6 only managed 10 hours and 23 minutes.

The Honor 6's graphics capabilities didn't impress either, even with Performance mode enabled. In Epic Citadel on Ultra High quality settings, for example, the Honor 6 only managed an average frame rate of 31.3fps, which is nearly twice as slow as what we achieved on the Nexus 5 and Z3 Compact. The Honor 6’s 3DMark scores were more promising, reaching 9,211 (or 39.5fps) in Ice Storm Extreme and 14,189 (or 59.7fps) in Ice Storm Unlimited.

To us, the Honor 6 is very reminiscent of the iPhone 5S, from its rounded design and flat glass back right through to Huawei's Emotion UI interface, which ditches Android's ubiquitous app tray so that all your apps are on show all the time. Our main gripe with the Honor 6 is Huawei's Emotion interface. Based on Android 4.4, the simplified icons and ugly settings menu aren't very attractive, and none of its additional themes help improve its appearance. You can only access the notification bar by swiping down from the top of the screen on the left hand side, which is awkward. Swipe too far to the right and you'll bring up the main settings menu instead.

You can tap the notifications tab to switch between the two, but it’d be much more convenient if they were combined into the same drop-down window, as with many other Android smartphones. We much prefer the Nexus 5's pure Android approach, especially as it’s now received an update to Android Lollipop, which could be a long wait on the Honor 6.

The large 5in, 1,920x1,080 IPS display is another boon, as it's unusual to see a screen this big on a handset at this price. The Honor 6's screen quality was marginally better than the Nexus 5’s, too, as our calibrator reported an impressive 95.1 per cent sRGB colour gamut coverage compared to the Nexus 5’s 92.9 per cent coverage.

The screen's high brightness of 482.2cd/m2 also makes it easy to use outside, and its contrast ratio of 964:1 provides plenty of detail and wide viewing angles. The only slight disappointment is the screen's rather high black level of 0.50cd/m2, which means text can look grey on desktop web pages, making it harder to read when you're fully zoomed out.

The Honor 6's 13-megapixel camera was a bit of a disappointment. Shadows in our outdoor shots were very dark, even in bright sunshine, and areas of detail tended to look muddy and hazy when we zoomed in to the photo's native resolution. Colours looked cool, despite the favourable lighting conditions.

The camera's HDR mode helped brighten dark shadow areas a little, but it also made colours appear even more pale and lifeless. Switching to Smart mode didn't improve things either, as it still struggled to pick out the detailed brickwork in our test shots in both light and dark areas of the shot.

^ As is often the case with keenly priced handsets, the camera is a minor weak point here

The Honor 6 is a great smartphone for £250, and its performance gives several top smartphones a real run for their money. It's not completely perfect, though, and we'd still choose the slightly more expensive Nexus 5 over the Honor 6, as we much prefer the Nexus 5’s design, camera and its pure version of Android. However, if Huawei's Emotion user interface doesn't bother you, and you want the best value phone for £250, you should buy the Honor 6. 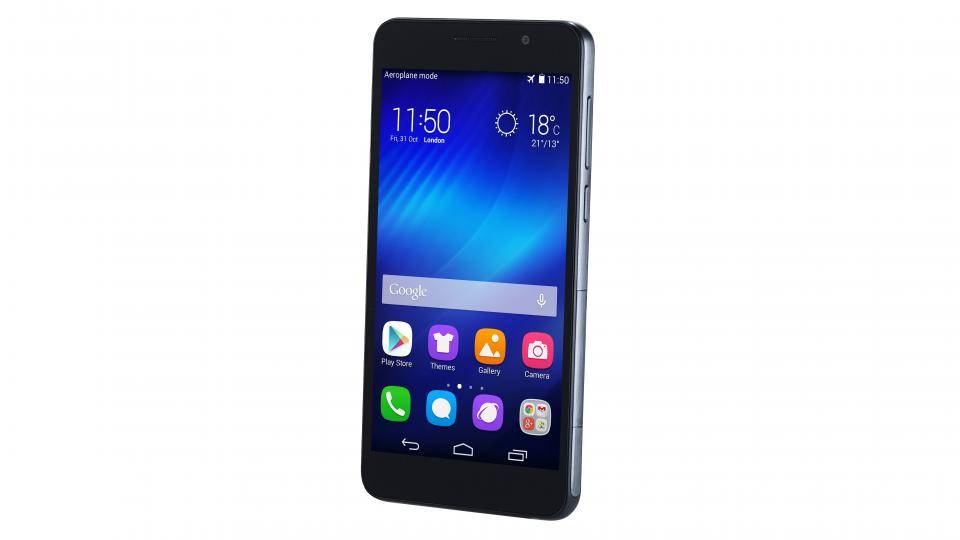