If you enjoy reading while having a long soak in the bath, the waterproof Kobo Aura H2O is probably the eReader for you. It’s also good a choice for those who want to take an eReader on holiday for a spot of poolside reading.

The Kobo Aura H2O is the waterproof version of the excellent Kobo Aura HD and it’s rated to survive for up to 30 minutes when submerged up to one metre. It easily survived when we dropped it in a hot bath full of bubbles, and we had no trouble drying the screen with either a towel or the supplied cleaning cloth.

The Auro H2O’s other stand-out feature is its 6.8in screen. At 265 pixels per inch (PPI), the Aura H2O’s screen is significantly crisper than the 212PPI display on the rival Amazon Kindle Paperwhite. This is an eReader that looks just as good as a normal book, which is something that can't be said of many cheaper devices.

The Aura H2O’s screen is also backlit, so we had no trouble reading our eBooks in dimply lit rooms. At maximum brightness the screen was much too bright, but with the brightness reduced the Aura H2O provided an even glow. There's plenty of room for books thanks to 4GB of storage, which can be expanded up to an extra 32GB if you install a microSD card. Considering that 4GB is space enough for many thousands of books, you shouldn't have any storage issues. There's no 3G version, so you'll need to be connected to a Wi-Fi network to download new books.

Our complaint that the original Aura HD was too bulky remains. At 233g the Aura H2O felt heavy in the hand and the angular back also made it chunky. That’s partly down to the size of the screen, which at 6.8in is considerably bigger than the 180g Kindle Paperwhite's 6in screen. The Aura H2O’s big screen won't be for everyone, but those who need to use larger fonts will be able to fit considerably more text on screen. There are also plenty of options for customising how books look, from changing the font size, weight and sharpness to adjusting line and margin spacing.

The touchscreen is the most responsive we've ever used on an eReader, mainly thanks to the Kobo H2O's speedy 1GHz processor. The Kindle interface is still more logically arranged and Kobo should remove superfluous options to make its eReaders easier to use. Using a Kobo is by no means a chore, but cleaner, better organised menus would make it even better.

At the time of writing, choosing an eReader is pretty much a choice between a Kindle and a Kobo unit. The main disadvantage of a Kindle is that you must buy books from Amazon, which some people won't like. With a Kobo unit you can shop at any eBook store (except Amazon of course), and even borrow books from your local library. 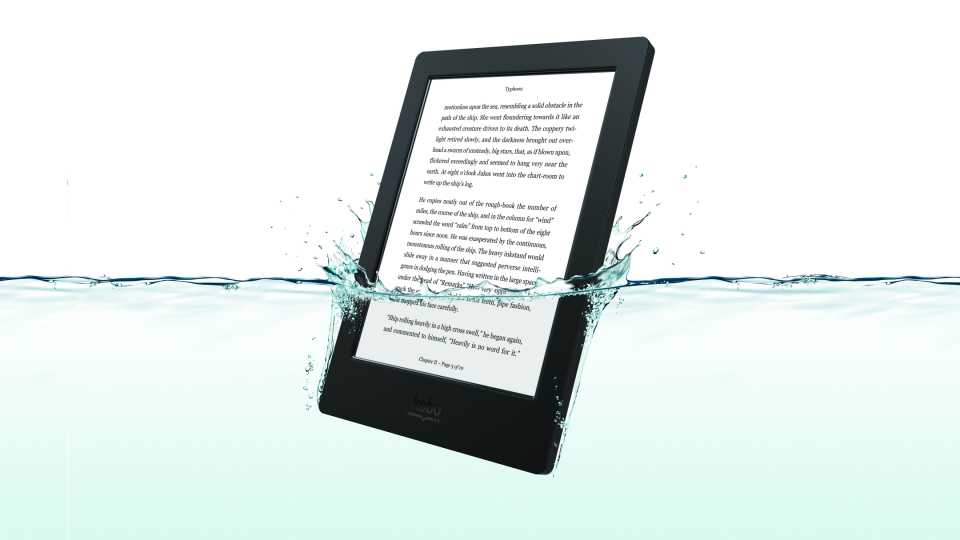