Learning to play the piano is hard. I know; I’ve been trying for almost a year, and wrote an article on my process and struggles a few months ago . 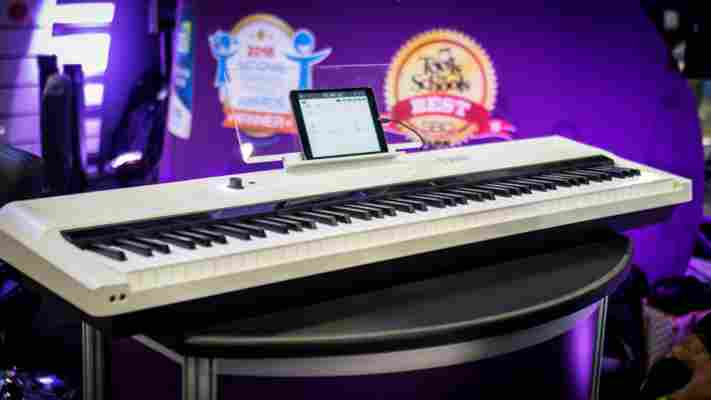 Not surprisingly, there are to a myriad of apps, websites, and other tools pop up over the years in order to make playing the piano easier. In many cases, these tools try to simplify the process by introducing a visual element to help you map and time notes without needing to know sheet music.

The $769 One Smart Keyboard Pro is such a product, but it’s better than most in that it doesn’t try to replace traditional methods. For the most part, it deftly straddles the line between helpful learning tool and fun gimmick.

An important disclaimer: I’m very much a beginner with many years to go before my opinion on piano technique is particularly valuable. My impressions are from the perspective of a beginner who has tried every major keyboard out there and consulted with people better than me.

With that out of the way, this is a tech blog, so I’m going give this piano the gadget treatment.

First off it, looks great. I think you’d be hard-pressed to find a better looking keyboard for its price. I tested the white model, which I far prefer, but it’s also available in black. Despite a largely plastic build, it all feels solidly constructed, and I love the minimal design and touches of acrylic.

Rather than being bloated with buttons and screens, the Smart Keyboard has just a power button and volume knob. Press in on the knob, and you can choose between 88 sounds – each corresponding to a color above a key. This color-coded system is surprisingly fast – each color group reflects a different group on instruments. It also looks rad.

But to access even more instrument sounds and advanced functions, you’ll need to attach your smartphone or tablet and download the accompanying app. Mercifully, the Smart Piano comes with USB-C, Micro USB, and Lightning cables to make it work with any Android or iOS phone or tablet. The omission of MIDI over Bluetooth is odd for a ‘smart’ piano in 2018, but at least the cable will charge your device as you use it.

Unlike many keyboards aimed at beginners, you get a full set of 88 fully-weighted keys. For the piano nerds, it uses a Medeli K6 action, same as in the Kurzweil SP6 stage piano, although they’re not graded to be heavier towards the left.

As with computer keyboards, piano keyboards can be quite subjective, but to my touch it feels better than similarly priced Yamaha actions and a tad behind Casio’s. It has a standard glossy finish rather than the grippy simulated ivory that’s become increasingly popular, but that’s no huge caveat.

That being said, you can get a significantly better action on comparably-priced keyboards like the Roland FP-30 or Kawai ES110. But that’s highly unlikely to matter for beginners or kids .

Where the Smart Keyboard does fall short for me is on the sound. The speakers themselves are better than some of the competition, but I’m not fond of the piano samples used. For one, there seems to be little to no sympathetic resonance, a physical phenomenon that’s important for a full-bodied sound on sustained notes. 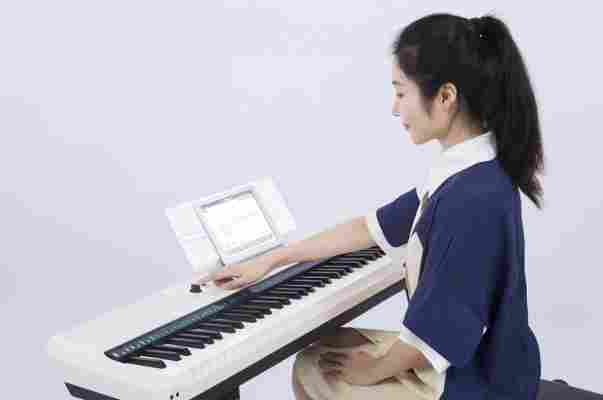 Almost every other keyboard $500 or above emulates this effect to some degree, but whether it’s not present or poorly implemented, I can’t seem to hear it on this one (the company makes no claim of including it on its documentation either).

Moreover, piano sample itself isn’t very nuanced – there’s a rather stark change in timbre depending on how hard you hit the keys. Pianos are supposed to change timbre with force, but it lacks a smooth gradation between pressure levels. Ironically, I think all the non-piano sounds are actually better than average for the category.

I don’t think the piano sound will be an issue for most, but if you care deeply about sound – I may be a beginner, but I love me some classical music – you might want try using it as a MIDI controller instead. If you have an iOS device, consider using the $18 Ravenscroft 275 app , which has some of the very best piano samples out there.

Onto the software, I was a little wary about the light-up system going into this review.

Spend some time around the r/piano subreddit or any piano forum and you’ll find plenty who advice against light-up pianos and Guitar Hero-style style apps like Synthesia . These gimmicks, pianists suggest, teach you nothing about theory and technique. Your eyes should be on the keys or sheet music, not some lights in between. You may learn how to play individual songs through muscle memory, but you’ll never become a musician.

But the Keyboard Pro strikes includes both traditional learning and newfangled methods. It’s by no stretch of the imagination a replacement for a real teacher, and I’d highly recommend using it alongside a good piano lesson book like Faber’s Adult Piano Adventures , but its modern aids can be a genuinely useful supplement.

Open up the app, and you see four options: Sheet Music, Crash Course, Videos, and Games. Each is useful in its own way, but unfortunately, the app doesn’t really tell you where to start. If you’re just starting out, you could be overwhelmed by the wealth of content. It would be neat if the app had some sort of skill assessment to help you figure out where to go.

My suggestion: Absolute beginners will want to begin with the instructional videos, which teach you the basics of posture, technique, and reading music along with some simple tunes to get you started. There are over 100 videos from the Hoffman Academy , a well-regarded online course, which sync up with the lights on your keyboard.

Once you have some basics down, you can try to tackle some pieces. For kids and beginners, the included games are pretty fun, using Synthesia-style falling notes. This okay for getting a feel of the keyboard, but I’d advise against sticking to this system too long lest it become a crutch.

Thankfully, there’s a ton of sheet music to mess around with – some free, some costing a few bucks. Each piece is assigned a difficulty level, making it easy to figure out what you should be able to learn.

Here sheet music is displayed the old fashioned way, but the notes on both the display and your keyboard light up to help you figure out where to play. This helps you develop muscle memory through rote repition.

But again, I suggest you avoid using the lights as a crutch; if you want to be able to play any piece of music in front of you, it’s important to learn to read notes without visual aids. Even the company suggests turning off the lights occasionally for the best results.

Your mileage may vary, but what I found worked best for me was to turn off the lights before starting a piece and try to figure out each section on my own at first. I want to learn theory, and sight-reading matters more to me than learning to play a song through muscle memory.

After I had a basic understanding of the section, I’d turn on the lights back on and work through it slowly. If there’s one thing my piano teacher has drilled into my head, it’s that it’s always better to slow down a piece to excruciatingly glacial levels than to speed through it. You should be playing slow enough that you make little-to-no mistakes; it helps make sure you don’t incorporate those mistakes into your muscle memory. Though it may take longer at first, it means you learn to play a piece accurately more quickly.

This muscle memory period is where I found the lights most valuable. The visual reinforcement helped me reduce mistakes significantly once I’d memorized the sheet music. Subjectively, I genuinely think I could learn new pieces faster this way.

Point is, you do you. The most important thing is that you practice consistently, and the app gives you the tools to mix things up and keep playing fun. Motivation is crucial.

I do have qualms about the keyboard. I wish it had Bluetooth so I wouldn’t always have to find the cable. I wish the piano sound were up to par with the competition. I wish the lights worked with other apps. And again, I think the app needs to provide better guidance for newcomers who aren’t working along with a textbook or teachers.

At $799 (currently on sale for $769), I think you can get a far better piano sound and action from something like a Roland FP-30 or Kawaii ES110. In fact, for the same price as the Smart Keyboard, you could get a better action and sound on a $500 Casio PX-160 or Yamaha P115 and buy the company’s own $269 Piano Hi-Lite – a clever gadget that basically adds most of the Smart Keyboard’s app-tastic abilities to any 88-key piano.

For that reason, I think the Smart Keyboard would be a much more compelling device if it were priced $100 – $200 lower. At its current price point, my inclination for adults committed to learning is to go for one of the above more established models, especially since they’ve proven to have strong resale value. Then you can add the Piano Hi-Lite if you like what the system has to offer.

But for many, the all-in-one solution makes more sense.  If you’re getting a piano for your kids, or are yourself just getting started and aren’t as finicky about sound and technical details as I am, the keyboard mix of fun tricks and traditional learning methods could compelling you to practice more often. Besides, if you ever outgrow the sound, you can always connect it to a PC or or mobile device to use it as a solid MIDI controller and access a higher quality sound.

Whether you’re an adult beginner or your kid is learning the ivories, the One Smart Piano provides the flexibility to learn piano in your own way. It shouldn’t replace traditional teaching, but bolstered by lessons and a good piano book, it might just help you play the songs you want faster and better.

We like some products. We don’t like others. Either way, if you buy something through our affiliate links, we get a small cut of the revenue. This isn’t a sponsored post, but for the sake of transparency, you deserve to know what’s up.